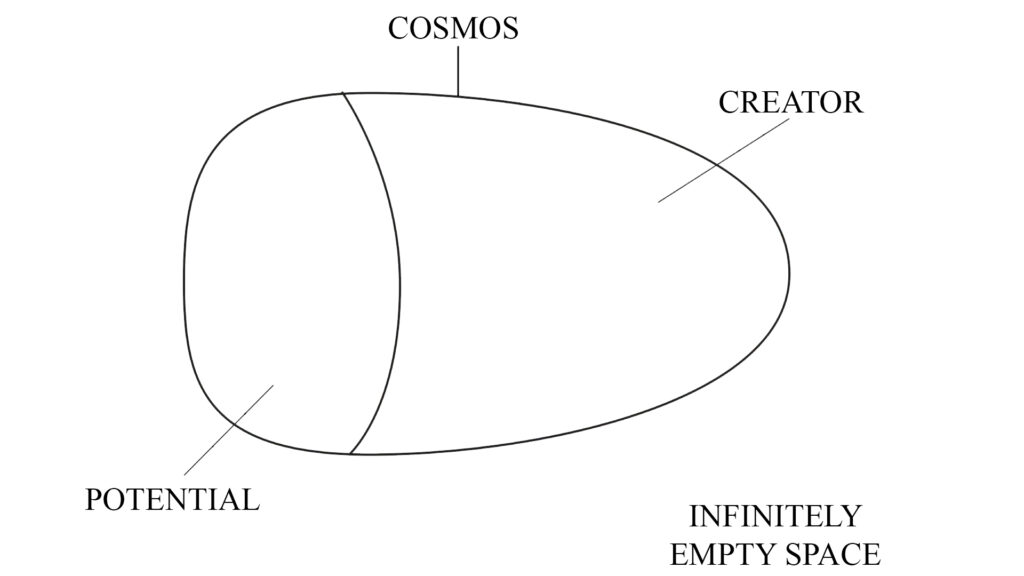 Infinitely long ago, so long ago that it cannot be expressed in real sizes, in real number of years, the cosmos was created. Before it there was nothing but empty space without any energy, without any matter, without anything, just an infinitely vast void. And then, spontaneously, mild springs appeared in several places, that is, mild energy effects. For some reason, these energy actions tended to approach each other and merge. The approximation of these minimal energy structures lasted indefinitely. When they finally merged, however, they began to grow gradually, to develop, thus united, increasing their energy potential and their power of thinking and reasoning. From that moment, another period passed, which was infinitely long and immeasurable for human frame of mind, during which this energy center developed so much that it gained enormous power, enormous dimension, enormous knowledge, and immeasurable intelligence. And then another infinitely long period passed for this immeasurable intelligence to come to the conclusion that it should somehow realize its knowledge, intelligence, and power. From that moment on, this immeasurable intelligence, this immeasurable energy field that did not occupy all this infinite empty space, but had infinitely large dimensions for human concepts, we can call this power the Potential.
And then the Potential decided to create some other energies, one by one, within its energy field. From that moment on, we can call this part of the Potential that began to create energies the Creator. In the next infinite period until today, which we can call the Age of the Cosmos, the Creator made an infinite number of energies, energy structures, centers, which practically filled two thirds of the space that the Potential encompassed with its field. One third of that space, which has the shape of an egg, the third that was on the side of the wider part of the egg, remained intact – the intact Potential. No energies were created in it, it did not form the creative part of the cosmos, no energy produced by the Creator can penetrate it even today. The remaining two-thirds of the space of the original Potential are made up of an infinite number of energies that completely fill it.